What I have Learned 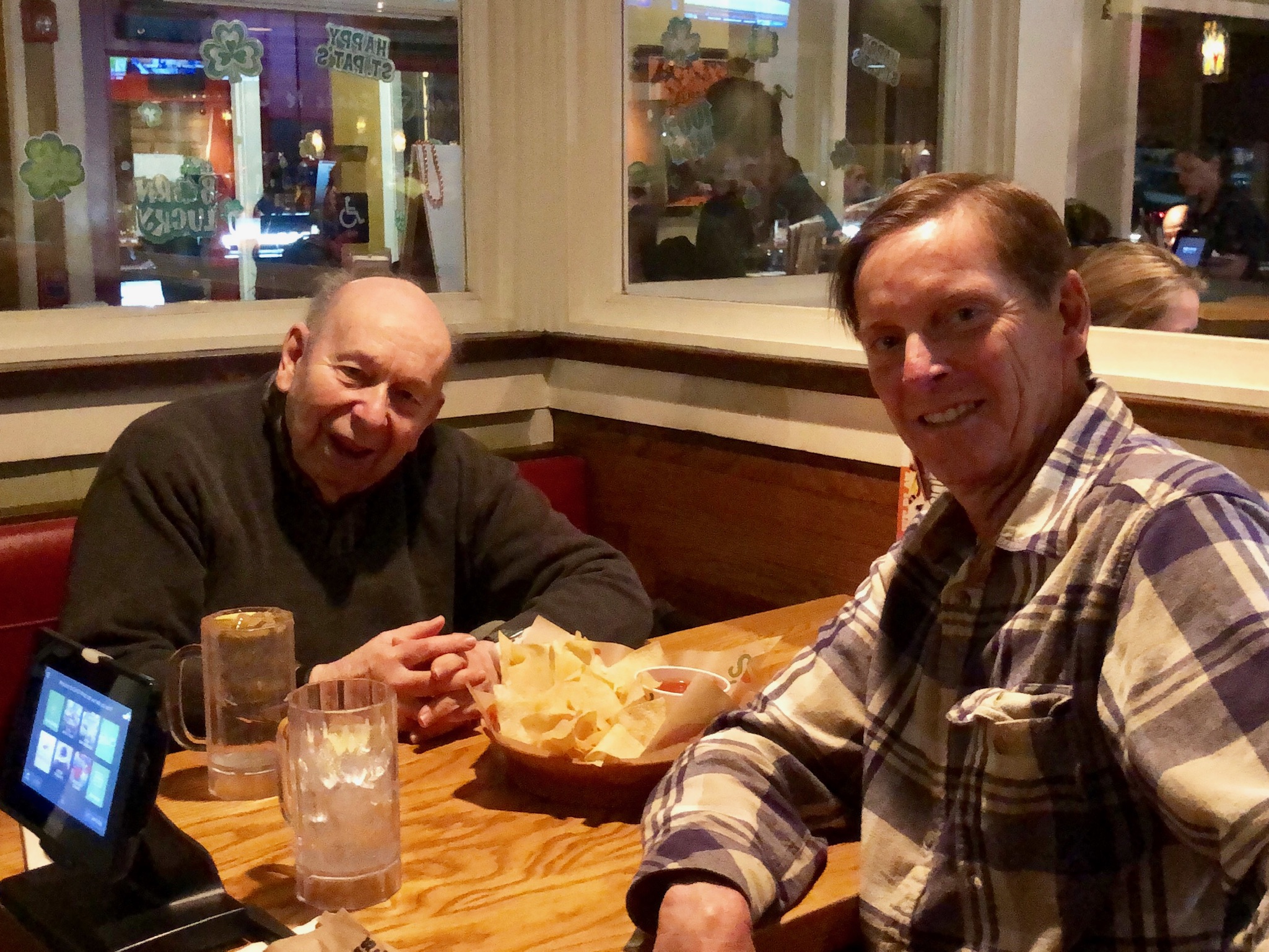 Only ten nights at home this month. Is all the travel worth the strain?

They say that travel is one of the best forms of education. Am I smarter today than I was last month?

It started with two weeks living in my old bedroom at dad’s house in the Pocono Mountains. I get to visit dad several times a year and have a lot of good running buddies in my hometown. It was single-digit cold on several runs and my gloves didn’t do the job. I learned I can run in shorts but need hand warmers for my gloves. I also learned that I’m not in competitive racing condition; I’ve adjusted my goals for the upcoming Boston Marathon accordingly.

Dad’s body is failing. He’s not on death’s doorstep, but he’s only got about six hours a day that he could be productive, sometimes less. That’s not unusual in the late eighties. His brain is still sharp, and he still has aspirations, projects he wants to pursue, things he wants to do.

When he wakes from his nap.

Dad is in the slow-go phase of retirement, on the cusp of the no-go phase.

Living alone in the house he bought when I was just three months old, he needs some help, which he is reluctant to ask for. On this last visit however, we accomplished a major family victory. He hates house cleaning chores, and some things haven’t been moved since mom’s funeral five years ago. Dad found and hired a cleaning service, and his reaction to their first visit was overwhelmingly positive.
My parents were married 59 years when we learned of mom’s kidney cancer. (A simple ultrasound ten years earlier would’ve discovered the tumor before it metastasized and could’ve given them more years together.) Grief counselors tell us that the amount of time grief lasts is directly related to the time needed to take effective action. The point is that dad needed five years to get to the mental state wherein he is ready to start taking control of the time he has left.

Only advisors ranked in the top eight percent of LPL’s over 16,000 advisors got invited to Masters. According to President Andy Kalbaugh, the 1150 attendees would rank as the fifth largest broker/dealer on Wall Street. It is a humbling honor to gain the invitation.

Thank you to all our clients for your confidence in our services, making the recognition possible.

This event, while considered an “award trip”, still provides tremendous learning opportunities as we hear from LPL’s leaders, and discuss ideas with many of the best advisors from throughout the country. While many of the pending changes are internal, they promise to help us do a better job supporting our clients in the pursuit of their individual goals.

A major problem we face is regulatory burden, and that’s caused our inability to communicate via text messaging or any form of interactive chat, even internally. However, I’ve been a part of LPL’s texting pilot program and if you want to text with me, use my virtual phone number (VPN) 951-425-4857. LPL CEO Dan Arnold apologized for the texting delay. But, there is a mobile app poised for release, and we’ll be in the first wave to offer it to our clients.

We learned that Gen Xers, born between 1965 and 1979, have the lowest rates of divorce and type 2 diabetes of any of the previous generations. They also claimed that this generation has a very sensitive “BS Meter”, making it difficult to sell to them. I also heard about the rise in “assortative mating”, the process of selecting mates who are more alike than different.

LPL’s new Chief Investment Officer, John Lynch, provided several insights on the current economic situation, mostly optimistic. He commented that the global economy has never led the US economy into recession, but the reverse has occurred. He reminded us that the media sells advertising and the steady drumbeat of earnings and income compounded annually helps our clients pursue long run goals but isn’t exciting enough to glue viewers.

While in Florida, I had an opportunity to catch my first ever Spring Training game, at the Twin’s facility in Ft Myers, where the Cleveland Indians clobbered them. Spring training is as much fun as regular season. You won’t see all the superstars play full games and a lot of players you do see, you’ll never hear from again. But nearly 10,000 people paid to see the game I attended. Spring Training is big business!

On the return trip to California, an old belief was reinforced. Checked baggage on connecting flights is prone to delay. I had decided to gate-check my roller board to facilitate my movements through Chicago’s O’Hare, but the first flight was a late departure, and my bag didn’t make the connection. To the airline’s credit, they sent me an email before I deplaned, which notified me of the problem, and I went straight to the baggage claim agent who scheduled the delivery.

During the week at home, I ordered a new briefcase/backpack combination (eBags Professional Weekender), which arrived in time for my next trip to the Barron’s Top Independent Advisor Summit (INDY) in Salt Lake City. The backpack is much better than a traditional briefcase, because it can leave both hands free, and I saw several younger people using the same one I bought. It has great storage capabilities, capacity for technology, an accessible hard shell “garage” for my glasses, camera, & other sensitive items, and has hand straps for both vertical and horizontal carry. It made it easy to get around the airport and the conference.

Barron’s INDY was amazing! And grueling. They don’t take breaks. Like my quarterly Financial Planning Association (FPA) meetings, it is education-focused, but without a sales orientation. It’s almost pure education for the purpose of providing better services to our clients and staying on the forefront of emerging industry trends.

The first day included five hours of CFP® continuing education on blockchain and crypto assets. After five hours my head was exploding in confusion. Please don’t ask me to explain “the blockchain” or tokenization, or distributed ledger technology (DLT). But rest assured, they are probably a part of our future online lives. Colleges are already granting degrees in the subject.

VoIP or Voice over Internet Protocol transformed telecommunications as now anyone can communicate worldwide with free software like Skype. MoIP or Money over Internet Protocol promises to similarly disrupt financial markets. But like any new technology, there are many cautions and the final session two days later with a former SEC chairman reinforced the data that the industry is fraught with bad actors.

There were several economic-forecast opinions, all well supported, delivered by experts, all mostly favorable for the near-term. The reason tech stocks are doing so well is because return on capital is trouncing the cost of capital. Brian Westbury characterized software development, saying all it takes to create an app is a case of Red Bull, a bunch of pizza and a few all-nighters. In other words, it costs virtually nothing to create something that can generate revenues.

The overarching lesson I gained from this final trip of the month is that our industry is on the cusp of change and that we need to continue proactively adapting. Fortunately, many of the individual ideas presented we’re already ahead of many other advisory firms. On others, we’re moving at the pace of LPL Financial, but we’re working diligently to help them head in the right directions. And on some arenas, we’re just scratching the surface and what I’m seeing is very exciting!

With the right mindset, the right gear, and the right supporting team, travels yield many rewards. I’m grateful to apply new insights and a reinvigorated outlook on behalf of our clients, firm and family.

In that context, travel isn’t so strenuous.

The opinions voiced in this material are for general information only and are not intended to provide specific advice or recommendations for any individual.

The economic forecasts set forth in this material may not develop as predicted and there can be no guarantee that strategies promoted will be successful.