Inside a Marathon: An All-Access Pass to a Top-10 Finish at NYC 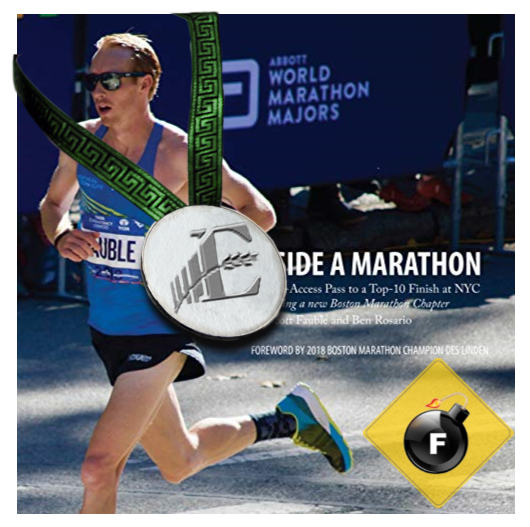 If you never heard of Scott Fauble or Ben Rosario, you probably don’t pay attention to Americans competing in the world’s major marathons. As of this writing, Fauble (Faubs) is the 11th fastest American marathoner and Rosario is his coach. This is the story of their build-up to a seventh-place finish in the 2018 New York City Marathon.

No one ever wrote a running book quite like this one. Each chapter chronicles a week in their lives, beginning with the training log and Scott’s thoughts about each workout. Then the coach describes his views during the week, and finally the athlete spells out the emotional, social, and physical impact of the work he did.

While unassuming, these guys are professionals.

They’ve set sights on the highest levels of competition on the biggest stages in the running world. And reading the kinds of workouts they’re doing is both inspirational and humbling.
During my reading, about a chapter each night, I felt myself persuaded to run just a bit harder, faster, or longer the next day.

Be sure to read the footnotes. They reveal Scott’s humble confidence and uncanny sense of humor.
Oh, and read it on something other than a Kindle Paperwhite, which turns the myriad photos into black and white boredom.

Scott joined us in a Zoom Open Hour on June 30, 2020. Watch for a replay soon at www.EnduringWealth.com to get to better know this rising star of American distance running.