Running Money® On the Trail – Don’t Get Bit

It was a little guy, about a foot long, just stretched out across the main trail. I was two steps beyond him before stopping, realizing it’s the first I’ve seen this season. Experienced runners develop a “sixth sense” about their footfalls.

As this summer winds down, FED Chairman Jerome Powell made it abundantly clear that the country’s central bank is laser-focused on inflation, while economic growth stays on the periphery. They’re running full bore at the problem of high food and energy costs, by raising short term interest rates faster than anyone could have considered possible last summer. They can and likely will stay on this course at least until they see widespread evidence of cooling prices.

I’ve not tripped very often because my brain instinctively helps my feet avoid landing on things like sticks, random loose rocks, or in this case, a snake. And not only was it the first of the season, but it is also the first of its kind that I’ve ever seen on these trails.

We’ve seen rising interest rates in other environments. Sometimes they simply cause market selloffs, while other times they’ve led to painful recessions. Policy makers don’t have the runner’s ability to feel the surface they’re traversing. They need data to make decisions, and data comes not in real-time but delayed by the tools used to collect, assemble, and analyze it.

I stopped to get a picture of the snake. They’re part of the environment, and since it was a baby, to protectively nudge him off the trail. Now don’t think I’m a fan of snakes. I used the toe of my shoe to push his tail toward the brush, out of the way of other runners and walkers.

The economy is not teetering on the precipice of disaster. It is absorbing the excesses of the past couple of years, not unlike a snake eating an animal twice it’s diameter. The huge economic stimulus, wild swings in consumption, and continued fears stoked by opportunists across the political spectrum must be normalized. It may take a recession to settle things down a bit. But it could be just the fear of a recession, like the fear of snakes, which causes the behavior changes.

But let’s not let a healthy respect of a slowdown turn into the economic equivalent of ophidiophobia, an overwhelming, crippling fear of snakes. As my toe nudged his tail, the rest of his body began to coil. I backed away, realizing that I was facing a baby rattlesnake. I kept my distance while he practiced striking and hissing. I got another picture, using the distance lens on my iPhone, as he was glaring, hissing, and wagging that forked tongue at me. 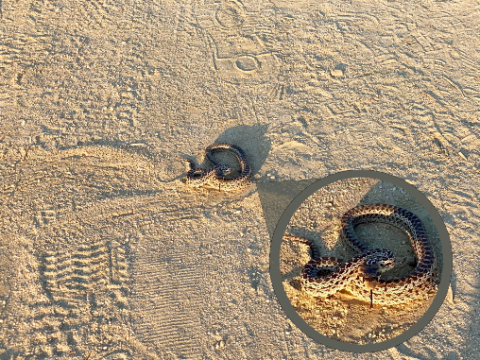 It was kind of creepy. And it influenced the rest of my run. Should I alert others that he’s out there, or let them enjoy the rest of their workout without the burden of thinking about something they’re not likely to experience personally? Anyone traversing these meadows should know there are all kinds of critters living here. We see owls, hawks, falcons, and, regrettably, crows above us, and coyotes frequently cross our paths. They’re all predators. I decided to keep the encounter to myself, he’ll probably leave the trail.

Unfortunately, I can’t keep you from hearing the recession word bandied about in the media. But perhaps I can help you develop a healthy perspective on its meaning and how to cope with it. Like the rattlesnake in the meadow, if it doesn’t bite you personally, it’s probably healthy for the economy. Remember that recessions can help reset prices, improve company performance, and remove excesses which inevitably develop in an overheated economy.

Long run investors should look at recessions as opportunities to add value to their portfolios. Stock prices of all companies can drop when the perception of a future recession increases, creating potential opportunities to invest some of that cash sitting on the sidelines, assuming there’s not a short-term need for those funds. Tactical portfolio rebalancing can accomplish a bit of the same work, by trimming from the relatively strongest positions to add to those positions suffering temporary price declines.

Only the future knows how close to recession policy makers are willing to move.

What matters to investors is what they are doing, knowing the rattlesnake (recession) is sharing their world. If it bites you (layoff) we have the tools (and you’ll have the time) to review and possibly reset your long-run goals. If your income is secure, we can help identify opportunities.

And if you’re already one of our many advisory clients, you already know that we’re constantly monitoring the situation, and making prudent adjustments on your behalf. You also know that we’re not afraid of rattlesnakes we can see but treat them with the respect they deserve.

The opinions voiced in this material are for general information only and are not intended to provide specific advice or recommendations for any individual. Past performance is no guarantee of future results. Investing involves risk including loss of principal. Tactical allocation may involve more frequent buying and selling of assets and will tend to generate higher transaction cost. Investors should consider the tax consequences of moving positions more frequently.